Welcome to our career site which provides us with the perfect platform to showcase the school. We hope that this career site will give you some insight into the way we work and what we offer, but we also hope it reveals something of the special place that Prince Henry’s is.

Prince Henry’s is a popular and over-subscribed High School of approximately 1300 students, including a strong traditional Sixth Form of approximately 340.  Consistently judged outstanding by Ofsted (most recently in May 2013), it was designated as a Specialist Language College in 2002, taking on a second specialism in Mathematics and Computing in 2007.  Converting to Academy Status in March 2011, and being awarded Teaching School Status in May 2014, the school became a SCITT (School-Centred Initial Teacher Training) in 2017, with the first cohort of 12 trainee teachers all successfully completing their training.

Prince Henry’s has enjoyed a long history since its foundation as an Abbey School as a part of Evesham Abbey over 600 years ago. Students come from parts of the town of Evesham and from villages nearby.   Education in South Worcestershire is organised on a three tier system and students transfer to Prince Henry's principally from our two feeder schools, Bredon Hill Academy and St Egwin's CE Middle School. Every year a significant percentage of the intake joins us from outside the traditional catchment area.

Prince Henry's is a truly comprehensive school with a fair representation of students throughout the ability range.   Very few students are lost to the independent/selective sector and this is reflected in the size of the Sixth Form, which is recruited largely, but not exclusively, from our own Year 11.   The school also has students with learning difficulties who are supported by the work of the Learning Support staff.   Over the years the school has achieved considerable success in its work with traveller children from the Vale of Evesham.  In recent years, students across the ability range have enjoyed considerable academic success.   In 2018 for example, 160 students took A Level courses and achieved a 99.5% pass rate. We were delighted that 23% of the grades were A*-A; 57% were A*-B and 83% were A*-C.  Our top two students achieved an amazing 3A* grades and two students were awarded places at Oxford or Cambridge.  Approximately 85% of our Sixth Form students go on to university, of whom well over 35% consistently go to Oxford, Cambridge, a Russell Group or Times Top 20 university.

We were delighted that when Ofsted visited Prince Henry’s as part of its survey into provision for More Able students (report published in March 2015), their final report specifically mentioned Prince Henry’s approach to supporting students from Year 9 onwards in their option choices, with careers guidance and preparation for Higher Education “This large high school (13-18) is excellent at raising pupils’ awareness of higher education and preparing them for the next phase of their education.” At GCSE, our students consistently achieve well above the national average in all areas.  2018 saw the introduction of numeric grades across the majority of GCSE subjects.  Impressively, 86 students (nearly one quarter of the cohort) gained 5 or more 7-9 numeric grades. We are also delighted that many of our students worked extremely hard to achieve their target grades with 99% achieving 5 numeric grades (grades 9-1).

The results across many of the benchmarks are closely matching those of last year which was a record breaking year for the school.  71% of the cohort achieved 5 GCSEs at grades 9-4, including standard passes in Maths and English (equivalent to 5 at A*-C grades) and 60% of all the numeric grades were strong passes (grade 5+).   A third of our students achieved the English Baccalaureate and nearly three quarters of our students achieved standard passes (numeric grade 4 and above) in both English and Maths, with 53% obtaining strong passes (numeric 5 and above) in both English and Maths.

We place great emphasis on good, formal but friendly relations between staff and students.   There is an impressive working atmosphere in the school and students are expected to, and in turn expect to, behave well, display good manners and common courtesies and maintain high standards of dress.

The school operates a 10-day timetable, with a school day of 5 x 1 hour lessons, plus a tutor period each morning.   No member of staff teaches more than 43 periods per 10-day cycle. The present Year 9 is divided into three parallel groups.   This arrangement allows considerable flexibility and departments are thus enabled to set students as they wish in each of the main subject areas.   In Years 10 and 11, the curriculum is based upon an Options system with most students taking English, Maths, Science, ICT, a Modern Foreign Language plus four options.   This list of optional subjects is extensive and includes some non-examination classes for the least able students.

Prince Henry’s High School is seeking to recruit strong subject specialists who combine knowledge of their own area with a willingness to consider and participate in some of the far reaching changes taking place in the secondary curriculum.   The pastoral system is positive and supportive and plays an integral part in the structure of the school.   All teaching staff will be expected to act as Tutor to a mixed ability Tutor group.   The pastoral system is organised on a year basis.   Each year group has a Head of Year, a Deputy Head of Year, Assistant Deputy Head of Year and a team of Tutors.

All students are actively encouraged to take part in extra-curricular activities, clubs and societies.   Team games at Form, House and School level are well supported.   Excellent playing fields adjoin the school and there is a full programme of competitive sport after school and at weekends.   The list of clubs and societies is extensive and wide ranging in scope, taking place at lunch time and after school.   Drama, Music and Dance are particularly strong.   Productions and performances recently include, “My Fair Lady”, “Romeo & Juliet”, “Hairspray”, “The Crucible”, “Guys and Dolls”, “The Taming of the Shrew”, “A Midsummer Night’s Dream”, a stunning production of "Les Misérables”, “Much Ado About Nothing”, “Oklahoma” and, for Spring 2019 “Me and My Girl”. There are also music festivals, dance performances, Christmas and Summer concerts.

Large numbers of students are involved in the Duke of Edinburgh Award Scheme at Bronze, Silver and Gold levels.   There are also several educational trips and visits within this country and abroad. The breadth and quality of the school’s curriculum and extra-curricular activities is also reflected the accreditations we hold for International School Award, Artsmark Gold, School Games Platinum and Careers Mark.

All these activities reflect the energy and commitment of the teaching staff at Prince Henry's and it is hoped that new colleagues will be able to strengthen and add to this important area of school life.   The cohesion of the school owes a great deal to the unifying effect of all these activities.

If you're searching for your next teaching post, why not contact us now? You'll be working at a great school and be part of a friendly, helpful team. We're always interested to hear from enthusiastic, committed teachers - send us your CV now via our School Talent Pool and say what sort of role you're looking for.

By joining our School Talent Pool we'll know you're interested in working here when a future vacancy occurs.

Parva Magna Crescunt
Great things will grow from something small

Our Mission: To create and develop the very best Teaching and Learning environment for all our students and staff based upon the virtues of sound traditional values.
Our Aim: To enable our students to leave Prince Henry’s with a first class outstanding education that becomes fully embedded and integrated into their future lives.

This will be achieved by:-

The sound traditional values we promote at Prince Henry’s:-

The Government emphasises that schools are required to ensure that key ‘British Values’ are taught in all UK schools.  The government set out its definition of British values in the 2011 Prevent Strategy.

The five British Values are:

The principle of democracy is consistently being reinforced at Prince Henry’s with democratic processes being used for important decisions within the school community, for instance, elections being held for Head Boy and Girl and Prefects’ positions.  The principle of democracy is also explored in the History and Religious Studies curriculum as well as in form time and assemblies.

The rule of law

Students are taught the rules and expectations of the school, which are highlighted in the planner (information sent home and website), the student code of conduct and behaviour expectations document.  Students are taught the values and the reasons behind laws that govern and protect us.  They also understand the responsibilities involved and the consequences when laws are broken.  Visits from authorities such as the police and fire service reinforce this message.

Students are actively encouraged to make independent choices, with the knowledge that they are in a safe, secure and supportive environment. We provide boundaries for students to make informed choices, through a safe environment and an empowering education.   Students are encouraged to know, understand and exercise their rights and personal freedoms and are advised on how to exercise these safely, for example through e-safety and form time work.

Respect is a strong part of Prince Henry’s ethos.  Students learn that their behaviours have an effect on their own rights and those of others.  All members of the school community treat each other with respect and this is reiterated through its teaching and learning environments.   Mutual respect is embraced throughout the curriculum by providing the opportunity for students to express their views in a safe environment.

Tolerance of those of different faiths and beliefs

This has been demonstrated through our International Schools Award. Students also benefit from a number of international visitors, including students from other continents and cultures.  The PSHCE curriculum enables our students to have a broad and balanced education on a range of faiths, religions and cultures.

In a wider context we support Remembrance, educate our students about the Holocaust, actively participate in Duke of Edinburgh Award, promote the Olympic and Paralympic values through our assemblies and engage in international exchanges. 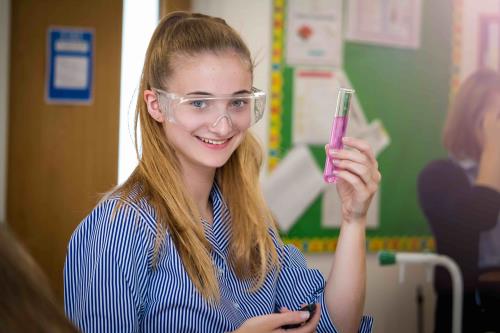