St Peter's is a successful forward thinking Catholic School which consistently achieves excellent results in GCSE and very good A Level results. There are 1100 students aged 11-18 and Mr Toby Miller is the Headteacher.

Academic excellence is matched by a commitment to develop a fully rounded personality within a Catholic environment. We place great value on our partnership with parents. Working together we can ensure that the children receive the best possible education and are prepared for their future life. St Peter's puts emphasis on a balanced timetable which offers our students the opportunity to learn together in a supportive and positive setting.

Students are encouraged to "achieve their own best standard". High expectations are set and endeavour rewarded Learning at St Peter's is about motivation and inspiration. Our students learn how to ask questions, to listen, to explore and to challenge.

Students are nurtured, their intellect developed, and their curiosity encouraged to stimulate their interest in the world beyond the classroom.

At St Peter's we are committed to the achievement of every single child regardless of his or her ability. We are proud to say that our most academically successful students regularly obtain the highest grades at A-level and go on to pursue their education at the best universities. We currently have former students following courses at Oxford, Cambridge, London, Durham, Exeter, Southampton and many more institutions around the country.

We are, however, equally proud of those students who having tried their hardest, achieve more modest results and leave school ready to take a full and active role in society. The latter point is central to life at St Peter's: we promote Christian values and seek not only to achieve excellence 'intellectually' but also 'spiritually.' It is our belief that there is much more to school life than the rigour of examinations and we strive to stimulate our students in order that they may become caring, compassionate human beings. We were delighted to be one of the first schools in Surrey that successfully applied for "Working in Partnership with Parents Award".

Learning at St Peter's is about motivation and inspiration. Our students learn how to ask questions, to listen, to explore and to challenge. Students are nurtured, their intellect developed, and their curiosity encouraged to stimulate their interest in the world beyond the classroom. To nurture a love of learning and an independent, proactive approach is always a priority. Students work within a disciplined framework gradually taking more and more responsibility for their learning. Above all, we believe that success in all things is best achieved through enjoyment.

St Peter's puts emphasis on a balanced timetable which offers our students the opportunity to learn together in a supportive setting and to experience sport, culture and working with the local community. We firmly believe that this approach not only benefits individual development but is increasingly valuable within the work environment.

I am very proud to be the Headteacher of St Peter's.  We seek in our school to create an inclusive community where everybody is valued and nurtured. People routinely comment on the friendly atmosphere that exists in the school but they also notice that it has a great sense of purpose. Relationships between students and staff are excellent.  Many members of staff have carved out very successful careers at St Peter’s. Please do come and visit us - we look forward to welcoming you into our community. Talk to me, talk to staff, most importantly talk to the students - we will do all we can to help you look below the surface and discover whether St Peter's is the right place for you to work.

How to find us

From London, heading South on the A3:

·          Fourth left is Horseshoe Lane East. Do not confuse this with the third left turn (Horseshoe Lane     West) which is just after the speed camera.

·          St. Peter’s School is shortly down Horseshoe Lane East, on your right hand side clearly signposted.

From the South, heading North on the A3:

·         As you approach Guildford, come off at the DENIS Roundabout (this slip road also leads to the A322 and A323, Aldershot, Bagshot. Get into the right hand lane of the slip road.

·          Continue straight on, through four sets of traffic lights (First lights has a bridge overhead, second lights you’ll see Burger King on the left, third lights will have the Fire Station on the right and fourth lights has the Spectrum on the left).

·          Immediately after fourth lights get into the right hand lane and go up to the roundabout. 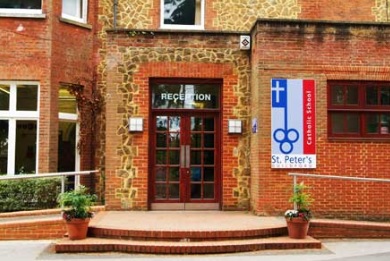